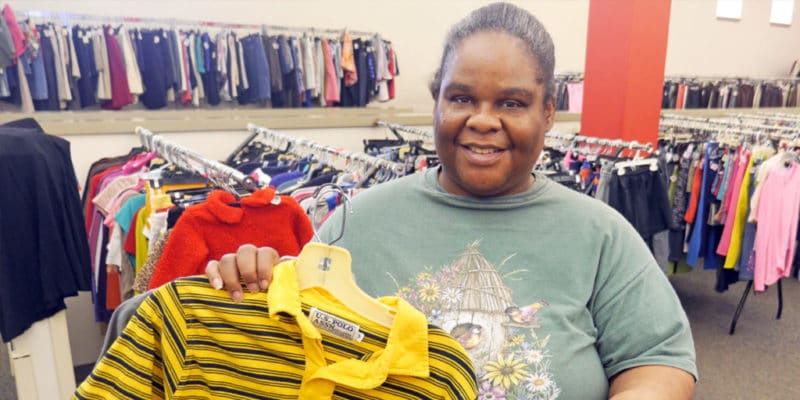 With nowhere to stay, Ada was taken to the Rescue Mission’s Emergency Shelter.

At first, she was somewhat apprehensive; she had never stayed in a shelter before.

A New Life for the Better

Ada arrived in Syracuse in 2014 and though she had no family in Central New York and didn’t know anyone in the area, she hoped to find work. When that didn’t work out, she began living in the Rescue Mission Emergency Shelter. She received toiletries and clothing and ate meals at the Food Service Center next door. A Mission case manager assisted Ada in getting a primary care doctor and connecting her with mental health services.

After about a year at the shelter, Ada moved into an apartment in Syracuse through a program for women transitioning from homelessness. Now Ada is living more independently, including cooking all her own meals.

She also volunteers at the Mission. Ada said she wanted to do something to give back. She currently volunteers 20 hours a week in the Mission’s Clothing Outreach Center in Syracuse, working the front desk and putting clothing on racks.

Ada has continued to defy expectations of those experiencing homelessness. In addition to her strong work ethic, she has bachelor’s and master’s degrees. She said she wants to complete the doctorate she previously started in public policy and become a researcher.

She said she is grateful for the support she received from Mission staff at the shelter and from her case manager and that it made a great difference for her.

"I wouldn’t have had anywhere else to go. They make themselves available to help people in need. So, I would say thank you."

Give the gift of help.You can put love into action by helping people like Ada, today.