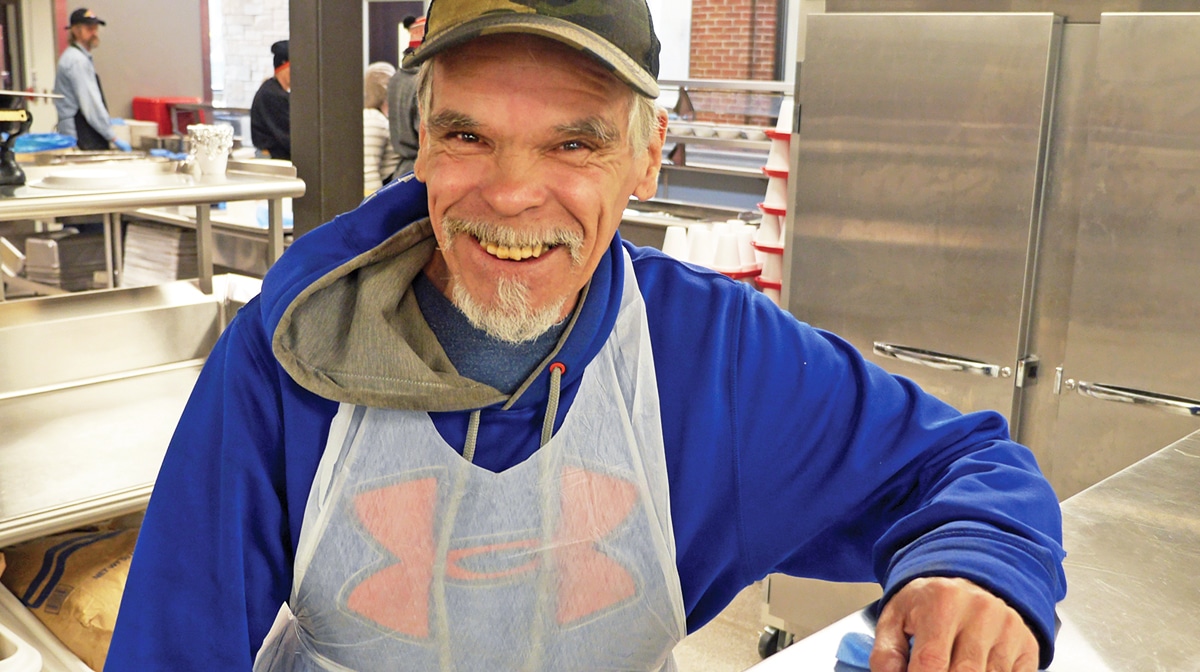 On the coldest night of the year, Steve wrapped himself in a blanket and comforter and settled into a nook out of the worst of the elements. After years of homelessness, the snow and cold seemed to matter less.

“It got to the point where I really didn’t care,” he says.

Surviving outdoors had furnished Steve, 58, with a Rolodex-like list of places he could wriggle into or under to escape the elements. On this night, he found himself hunkered down in the heart of downtown Syracuse.

But that night is one that Steve now says changed his life.

All he wanted was a pair of gloves and a job

The Point in Time Count

It was January of 2018 and volunteers fanned out across the city and county for the annual “Point in Time Count.” The mandated count each January provides a snapshot of the homeless community. Those staying in shelters are counted and volunteers search for anyone living outside.

Ben Walsh, the Syracuse mayor, was driving around that night with outreach workers. Walsh suggested checking a spot he knew about. They found Steve sleeping there.

“It was like why is somebody trying to bother me?” Steve says. “I’m trying to sleep here.”

Steve spoke with the mayor and the outreach workers. He was adamant that he didn’t want to go to a shelter. He told them all he wanted was a pair of gloves and a job.

Jim, part of the Rescue Mission’s street outreach team, offered to meet with Steve and asked where he would be tomorrow. The next morning, Steve was at the library when Jim came and said he’d found a place.

“I didn’t think it was possible,” Steve says.

When he saw the place – a rooming house in Syracuse – Steve was reluctant. He says he decided that it would be worth it if it meant he could stop huddling under blankets every night.

Steve stayed about six weeks. He received assistance from the Department of Social Services, but says he didn’t totally understand what he needed to do to keep it, lost assistance and ended up outside again.

"When I was out there it was like people would look at me, but not look at me. It was like they would look through me...It makes you feel like you’re nobody, like you don’t exist."

Steve was used to setbacks in his life. Born and raised in Syracuse, he lost both parents when he was about 13. His first brush with homelessness came during an economic downturn years ago. Steve says he’d lost his job and struggled to find another. At first, he wasn’t overly concerned. He had money saved and could afford to keep his apartment.

“I figured something would eventually come along and I’d be fine,” Steve says. “But nothing came.”

When his savings dried up, Steve was evicted. He spent several years after staying on friends’ couches or in their back rooms. He eventually began living outside.

Steve learned to survive, finding crawl spaces and recessed entryways he could use. Park benches were preferable during warm weather. For food he regularly turned to the Rescue Mission – which serves three free meals daily.

“When I was out there it was like people would look at me, but not look at me. It was like they would look through me,” Steve says. “It makes you feel like you’re nobody, like you don’t exist.”

When Steve landed back on the streets in 2018, it was a low point.

"And now I realize that life is good. Not perfect, but good."

Jim had stopped by Steve’s room to check on him and learned from the landlord that Steve wasn’t there anymore. Jim figured Steve must have returned to the streets and began searching for him. Eventually, Jim found Steve and started over with him.

They worked together to get Steve identification and Jim helped sort things out with Social Services so Steve could receive assistance again. Today Steve has an apartment of his own. He also regularly volunteers at the Rescue Mission. He typically washes dishes, cleans counters and sweeps. He says he enjoys volunteering in part because nobody judges him and he’s part of a team. He can also relate to many of the people who come for a meal, he says.

Jim still checks in on Steve. In the future he’d like to find a full-time job. He’s working on that goal but for the moment, he says he’s happy to be alive. He says the Rescue Mission played a large part in saving him.

“I’d still be in my hidey hole, if I was even still alive because like I said, I’d pretty much given up,” Steve says. “And now I realize that life is good. Not perfect, but good.”

Give the gift of help. You can put love into action by helping people like Steve, today.

Putting the Pieces Back Together