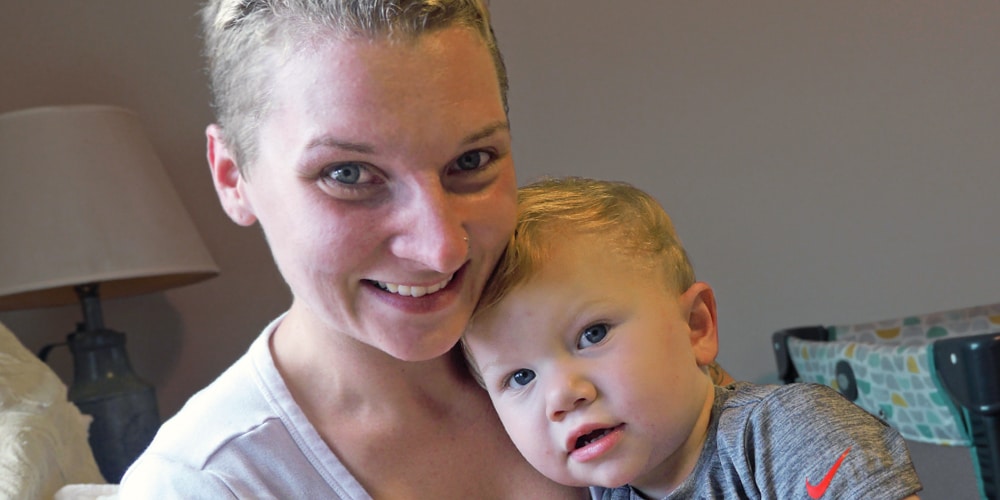 Even now that she’s been settled into her new apartment for several months, it’s hard for Mariah to look back on the past year.

“I just felt like a bad parent because because we didn’t have a stable home.” she says.

Mariah became homeless when a bad relationship with her son’s father ended. She found herself with no place to go. Mariah wound up living in a camper. The camper had no running water or electricity, making it tough to take care of her son.

“I had no money to get a babysitter, so I couldn’t go and look for a job,” she says. “We did the best that we could, there were sad moments, and lots of tears.”

As the cold weather settled in, even with space heaters, it was bitterly cold in the camper. At one point, it was warmer for the two of them to sleep in a van with the heat running.

“I had a van not on the road at all, but I remember sitting in there with it running because it kept us warmer than the camper,” she says as her voice broke.

“That’s when I thought I can’t do this anymore. It wasn’t that I wasn’t a good mom, I just didn’t have a place to live.”

With no other options, she reached out to the Auburn Department of Social Services. They provided her with a hotel room, and resources for her to find daycare and a job. After staying in the hotel, Mariah’s case worker told her about an opening at the Auburn Rescue Mission’s transitional housing program.

“The feeling is indescribable knowing that there are people out there to help you along the way when you are struggling,” she says.

"Without prayer I wouldn't have had any hope."

Mariah remembers walking into her apartment at the Auburn Rescue Mission, outfitted with all of the necessities. On the very first night, she and her son dined on a spaghetti dinner provided by staff.

“When I was homeless I didn’t know when I would get a couple of dollars for food,” she says. “Just knowing that I could go to sleep and not worry about anything other than saving money and making an effort to get my own place.” It was life-changing.

Once she was settled in, she began working with her case manager Krista on finding a job, housing research, and putting her life back on track.

“Krista had an amazing impact on our lives,” she says. “She was always there no matter what I needed.”

Mariah’s life today is much different than a year ago – she recently moved into her own apartment, has started a cleaning business, and was able to purchase a car.

You can put love into action by giving a financial gift today!