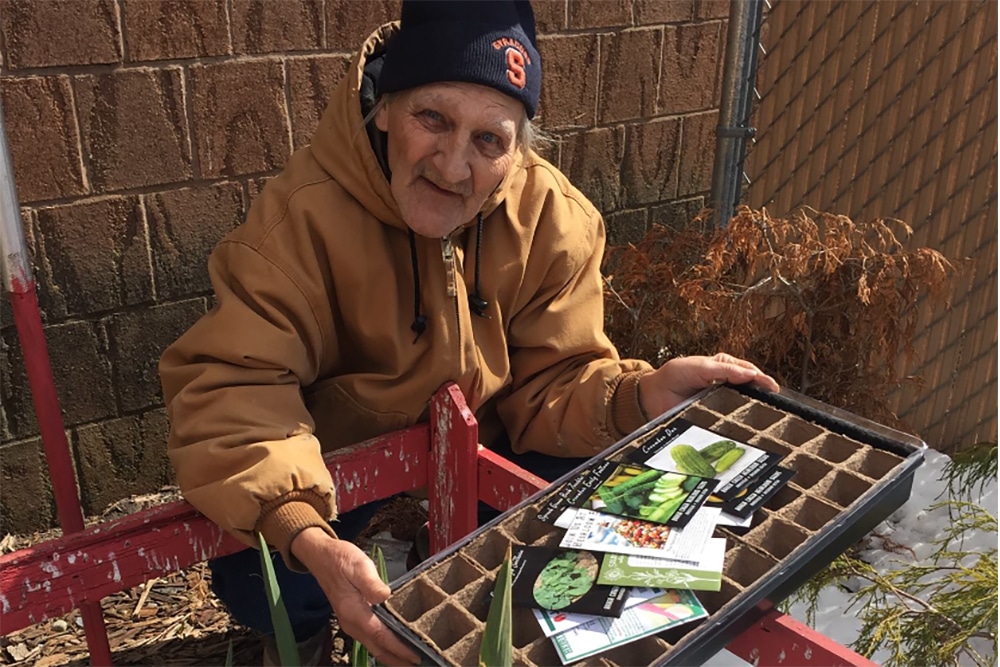 Garden of Eden at Crossroads

In biblical terms, the Garden of Eden is synonymous with paradise on earth. Doug’s garden, which partially surrounds the Rescue Mission’s Crossroads Adult Home, is a personal “Garden of Eden”. Tending to the garden since its inception, Doug has found his own paradise. As the primary caretaker, Doug has maintained the garden “as long as I’ve lived [at Crossroads]”.

Doug’s garden is more than just a haven, though. Residents and staff consume the fresh produce year round. With a selection including cucumbers, tomatoes, zucchini, watermelon and other crops, there is a variety for all to enjoy. Doug has no personal favorites, though; he just loves the time spent in the garden. On the other hand, he receives frequent requests for the annual crop. Others often supply the seeds for produce they would like grown. “People often bring the things they’d like for me to grow, and that’s where some of my garden comes from,” Doug said.

This paradise doesn’t exist without hardship, as Syracuse weather can be unforgiving. Doug laughed when asked when he likes to start his gardening season. “Whenever this place will let me,” he said, as he gestured to all the snow covering the garden on a sunny April afternoon. While Doug wouldn’t have it any other way, the physical labor is another drawback. But he shrugs it off, saying “It comes with the job.”

Doug’s window at Crossroads faces the garden, and that is no mistake. This is so he can always have it close to him. The significance is clear. Everyone needs an escape or a release, in which they can find peace or happiness. In his “Garden of Eden”, Doug has found that therapeutic outlet. And in the correct season on a good day, Doug says he’ll spend nearly the entire day in his garden.

"I’m in here from nearly sun up to sun down… this is my gift from God."

Thanks to Rescue Mission friends like you, Doug’s garden is in bloom. You can help Rescue Mission residents pursue their passions. Please give today.

“The Faith of a Child”